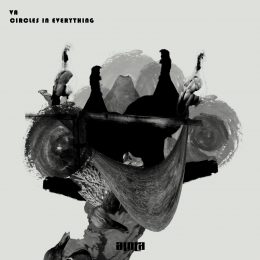 Alola Records return with a brand new six track album titled ‘Circles In Everything’. Music by Mr C, Omid 16B, Alex George, Kike Roldan & Leo Del Toro, Diego Ro-K, Nick Stoynoff & Danny Oliveira. The first track on the release is Omid 16B’s ‘Around Me’. The hypnotic vocal and sexy atmosphere, together with the bass line, create an excellent late night feel to this tune. ‘Midnight’ by Kike Roldan & Leo Del Toro (Friends With Benefits) from Miami. This is their first release together showcasing their style & passion for the music they love. A lovely intro that build ups with intensity, incorporating a variety of musical elements throughout that’s sure to keep the listener captivated. ‘Soulfuric’ by Mr. C is a magician of a track, almost tricking you until the bass line drops and and gives you that real Tech House sound. A distinctly heavy bass line, a recurring feature found throughout the track with style. Adding a gentle mixture of melodic phrases, this mix climbs gradually, sparking the imagination of its audience. Nick Stoynoff & Danny Oliveira have teamed up for this release in the shape of flip flop’s. You could say this is intelligent techno, not over produced or trying to be trendy, but ‘Flip Flop’ is beyond trying to impress as it embraces an atmospheric feeling from the go, encouraging, positive & yet very emotional. Alex Georges’ ‘Only This’ is a gem, made only with a complete modular setup, Alex really shows his multiply talents with a gentle introduction of a melodic nature, adding an airy feel, giving you the feeling of being out of this world. Diego Ro-K finishes off the album with ‘9.21’. Diego waited patiently for this release proving the test of time, a solid percussive house track that works well in the mix with almost anything and certainly sounds great on its own if you like your hips moving.