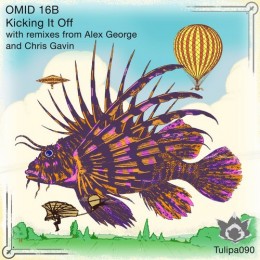 Omid 16B is Kicking It Off in the 5th dimension. Coupled with the tender firecrackers Alex George and Chris Gavin, Omid begins his warbled journey into the mystical gardens as a transmogrified toad that hops casually through the gates. A fevered smog descends throughout the fields and a burning sensation trickles up the creek toward the shivering nightingales. Fourteen soft-spoken opossums sing an ode, harmonizing together under the vaulted skies. Clocks called my name twice. Smitten in the soul with nowhere else to go. A lavish dessert prepared under slivered moonlight. Diluted in the seemingly endless blackness. Special trickery. If life were a marble, I would be the stripe inside. She sang her song in the pasture until a reindeer appeared. Leave the house for sleep. A candy-coated future. We were young, free, and careless. Too many lounging antiquities. Thrilling levees. Stationed near the sanctuary. 2014 Tulipa Recordings http://www.tuliparecordings.com Artwork by Justin Chodzko Words by Summer (Brendon Collins)