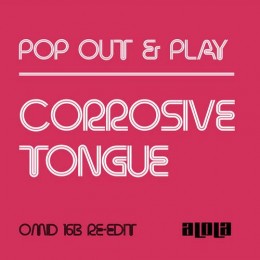 Way back in the mid 80s, Simon Tappenden and Wil Russell first noticed each other’s tags in a dark subway and became buddies. Spray-paint fumes, Hip Hop & Electro beats and skateboards somehow led them to their first rave in 1989. Keyboards and samplers were purchased and by the mid 90s they were making tunes in a bedroom lit with only black light.. Wil and Simon eventually moved their Deep / Tech / House studio into West London and picked up the pace. Mr.C’s Subterrania night at The End became their regular haunt and in 2001, Omid 16b released their first record for Alola. A mere 12 years later the lads reformed as Pop Out & Play, and have put together a second release on the label. ‘Corrosive Tongue’ is spiralling house music with a cosmic 80s tinge, perfect for the summer floors.